My daughter Chelsea wrote this lovely tribute to mothers as seen through her eyes growing up.

I was raised in a separate world from you.

Yes, we played naked together in sprinklers and sat side by side in a turtle shaped sand pit

But when our halcyon days ended

You were sent with the other fathers to the porch and

I was enveloped into the cloistered world of a Midwest kitchen.

We were raised together but apart.

I became party to the secret world of our mothers

Or rather I became party to the world of secrets.

Secrets you will never know:

How to serve coffee and perfectly slice a tiered wedding cake

Why we always serve angel food cake with egg noodles

My young eyes bore witness to all of your childhoods through the eyes of your mothers.

I saw your new skateboard through Auntie’s tight throat.

I saw your deployments through Auntie’s tears a salty mix of anxiety and pride.

I saw the birth of the next generation through the joy of new grandmas.

Our mothers taught me to see people with a certain gentleness.

They taught me to see the hope and look for the good. 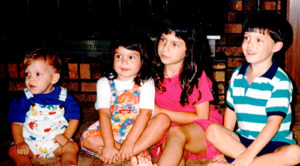 I was witness to the graceful love she showed you each time you went to the emergency room after you did whatever it was she had already told you multiple times not to do—dumbass.

As a child I was jealous and resentful of your freedom and your exciting adventures. I longed to be free of my white tights and black-patent Mary Janes. I dreamed of scraped knees and broken arms, childhood battle wounds of my own.

But now…I can think of no better blessing than to have been raised in a crowded kitchen surrounded by blended margaritas, laughter, and an unconditional love that seems to follow me wherever I go.

For all the mothers I have been privileged to know,

Thank You and Happy Mother’s Day.