How The Right Reflection Came to Be: A Mother’s Day Tribute

My mother is an inspiration for much of the work that I do today. This is my gift to her.

Back in 1964, my family moved to Lincoln, NE from Grand Island Nebraska where my father was a teacher, administrator, coach, and my mother was a frustrated homemaker. The purported reason for the move was to allow my father to finish his doctorate at UNL. I think the real reason was to let my mother get a life.

Oh, she had tried to make an interesting life wherever she went, but nothing so far in her 35 years had been enough for her. She loved her two children, but she was born in a generation where options in addition to motherhood were limited.

When my older brother went to kindergarten, he had some difficulties. His teacher, Mrs Curtis (a retired Army WAC) refused to display Steve’s artwork with the other kids because his pictures were “wrong.” He was fascinated with trucks and busses as were many little boys, but on his vehicles, the wheels were always incredibly large in relation to the rest of the vehicle. Rather than become angry with the teacher, Mom started reading books on art in order to teach Steve to draw “right.” 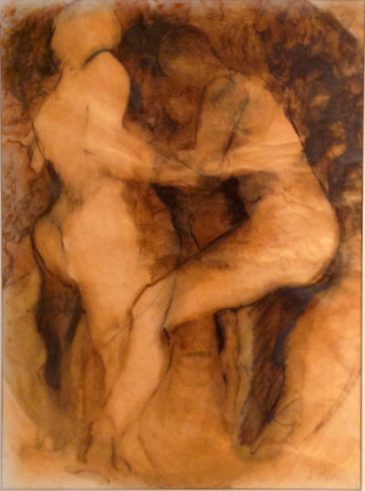 She discovered a concept called “perspective.” To a 40” little boy, looking up at a large school bus, the wheels did look large. Steve wasn’t wrong. He had a different perspective. Three years later, I also had Mrs. Curtis as a teacher and she hadn’t changed a bit, but my mother was a different person.

Fast forward to 1965. Mom was a freshman at UNL majoring in Art. Her drawing teacher instructed the students to go outside and draw a tree. Sitting on the sidewalk in the warm spring morning, my mother apparently didn’t want to draw trees.

So she began a sketch for a work that she later titled, The Three Graces. The Three Graces from Greek Mythology are often depicted as three nude women frolicking together. They grace others with joy, beauty, charm, etc..

As students were passing between classes, some stopped to look over the art students’ shoulders and see what they were drawing. One particularly serious young man, (I imagine him with white shirt, black slacks, skinny tie, heavy black-rimmed glasses) looked at my mother’s drawing of the three nude women dancing. He peered into the distance and back at her sketch and commented, “Where do you see that?” She replied, “You have to know how to look.”

It’s been 40 years since my mother died at the age of 46 of colon cancer. She said she lived more in the 11 years in Lincoln than she had in the 35 years before then. She saw in whole new ways both in her art and in her life. Her picture of The Three Graces hangs in my office and has always been an inspiration to me. My goal is to help others see in whole new ways.