I friend of one of my grown daughters sent her a text today: She said, “I’ve had a rough week and last night I dreamt that I came back to your old house for some mama Hernandez love.” I was so touched. And it reminded me that we never know the effect that we have on people.

It reminds me of one of my favorite Christmas movies, “It’s a Wonderful Life.” If you haven’t seen it for a while, it’s the story of George Bailey, played by Jimmy Stewart. George lives in a small community, Bedford Falls, and one Christmas Eve, despondent over his financial situation, he utters a desperate prayer, “I wish I’d never been born.” Clarence, a rather clumsy angel, arrives at the scene to show George what life would be like in Bedford Falls and for the people who live there if George had never been born. The lesson is that one person can have a tremendous influence on others, and George eventually realizes that he really does have “a wonderful life.”

To John Rasmussen, my godfather who was more grandpa to me than anyone and delighted in making me laugh

To Mrs. Burton, my first grade teacher who taught me to read and opened a world

To Mrs. Caldwell, my fifth grade teacher who read “A Wrinkle in Time” out loud to us everyday after lunch

To Joan Hobart (Hobie) my colleague at Burke High School, who modeled for me what being a good teacher looks like

To both my grandmothers, Grace and Henrietta, who were entirely different but the same in their love for their families

And of course most of all, to my mother and father, the source of my everything. I lost my mom in 1975 and my dad in 2013. I’ve included a link to the remembrance I wrote about my mom on this blog and the eulogy I delivered at my dad’s funeral, below.

May your Memorial Day be filled with special memories!

Thank you for being here. I hope I can get through this, but if I can’t I’ve made copies of my words. It’s very important to me to tell you about my father. As many of you know, he was one tough guy. He survived cancer in 2001, should have died of encephalitis in 2010, and bounced back more than anyone thought possible. On December 23rd, he and Louise were supposed to come to our house in Omaha to celebrate Christmas. I received a call from Louise that she was taking Dad to the hospital because he had difficulty breathing. That was the start of his final illness, which ended early last Tuesday morning.

Christmas was rather topsy-turvy at our house but Rod, the girls and I did manage to complete one yearly ritual – watching the old movie “It’s a Wonderful Life.” If you haven’t seen it for a while, it’s the story of George Bailey, played by Jimmy Stewart. George lives in a small community Bedford Falls, and one Christmas Eve, despondent over his financial situation, he utters a desperate prayer, “I wish I’d never been born.” Clarence, a rather clumsy angel, arrives at the scene to show George what life would be like in Bedford Falls and for the people who live there if George had never been born. The lesson is that one person can have a tremendous influence on others, and George eventually realizes that he really does have “a wonderful life.”

My father also had a wonderful life, and you here today are proof of that. You’re here because Bert had an effect on your life or the life of someone you care about. Raise your hand if you’re related to Bert by blood or marriage. Bert was the fourth of eight children, and as you can see by the show of hands, the Alfrey family has always been close.

At heart, my father was a teacher, coach and mentor. Raise your hand if my dad taught, coached, or mentored you at some point in your life. During the 1950s, my dad coached baseball and basketball at Grand Island Senior High School. The class of 1957 invited my dad to their 50th high school reunion in 2007. I went with Dad. The class of ’57 was special to my dad because that was the year he coached the basketball team to the finals of the state tournament where they barely lost to Boystown.

At the reunion, I was amazed at the reaction to my dad. 68 year old men who towered over him addressed him almost reverentially as “coach,” and talked about the profound effect he had on their lives on and off the basketball court.

A life long educator, that’s for sure. Even after Dad officially retired, he supervised student teachers up until age 83. My cousin, Marlene, supervised student teachers at UNL alongside Dad during the early 2000s. She told of meeting a new student teacher who had been assigned to her and the girl looking disappointed. The girl said, “I thought I was getting the old guy. I hear he’s pretty good.” Marlene answered, “He is good, but he’s my uncle and he taught me everything I know so you’ll be all right.”

Many of you have “Bert” stories. After the service, we’re going to have lunch. Dad loved a good party, and I ask that you share your “Bert” stories. The Alfrey family gathered last night and we shared “Bert” stories long into the evening. My last Bert story occurred just a few hours before he passed away. He was rather agitated and wanted to pray. Louise held one of his hands and I held the other. We took turns saying the Lords Prayer as it seemed to calm him. I suggested to Louise we switch to the 23rd psalm so we started “The lord is my shepherd, I shall not want,” and then we started wandering a bit. Louise was anointing our heads with oil while I was wandering through the valley of death. Either way, Dad found it soothing and relaxed. Louise went and sat on the couch and I remained holding Dad’s hand. He started mumbling something. I asked him what he was trying to say and he opened those beautiful blue/gray eyes, looked straight at me, and clear as a bell said, “Shit happens” Louise and I looked at each other to make sure we’d heard the same thing, and after a moment, broke out laughing. Yes, dad, it does indeed happen. And you always made the best of whatever happened.

As you go about your lives the next few days, I ask that you think about what Bert did for you or for someone you care about, and do something similar for someone else. The ultimate tribute is to “pay it forward.”

In fact, even in death Dad is paying it forward. About three weeks ago, he had a pacemaker implanted. When he realized the end was nearing, he fretted about the pacemaker going to waste and wanted to know if it could be recycled. Louise asked but learned that “no” the pacemaker couldn’t be reused – in people. They can be used in dogs. As most of you know, dad was a devoted dog lover, especially of his beloved Sadie. So Dad’s pacemaker is going to the Missouri veterinary school where it will be implanted in a deserving dog. The doctor there told us about an instance where she implanted a pacemaker in a shelter dog that went on to be adopted, trained for search and rescue and who was used to find victims after the Joplin tornado.

In closing, I’d like to read an excerpt from a newspaper article about the violinist, Itzhak Perlman. “On November 18, 1995, Itzhak Perlaman, the violinist, came on stage to give a concert at Lincoln Center in New York City. If you have ever been to a Perlman concert, you know that getting on stage is no small achievement for him. He was stricken with polio as a child, and so he has braces on both legs and walks with the aid of two crutches. To see him walk across the stage one step at a time, painfully and slowly, is an awesome sight. He walks painfully, yet majestically, until he reaches his chair. Then he sits down, slowly, puts his crutches on the floor, undoes his clasps on his legs, tucks one foot back and extends the other foot forward. Then he bends down and picks up the violin, puts it under his chin, nods to the conductor and proceeds to play.

But this time, something went wrong. Just as he finished the first few bars, one of the strings on his violin broke. You could hear it snap – it went off like gunfire across the room. There was no mistaking what the sound meant. There was no mistaking what he had to do. People who were there that night thought to themselves: “We figured that he would have to get up, put on the clasps again, pick up the crutches and limp his way offstage – to either find a new violin or else find another string for this one.”

But he didn’t. Instead he waited a moment, closed his eyes and then signaled the conductor to begin again. The orchestra began, and he played from where he had left off. And he played with such a passion and such power and such purity, as they had never heard before.

When he finished, there was an awesome silence in the room. And then people rose and cheered. He smiled, raised his bow to quiet us, and then he said – not boastfully, but in a quiet pensive reverent tone, “You know, sometimes it is an artist’s task to find out how much music you can still make with what you have left.”

What a powerful line that is. Perhaps that is the definition of life – not just for artists but for all of us.. Perhaps our task in this shaky, fast changing, bewildering world in which we live is to make music, at first with all that we have, and then, when that is no longer possible, to make music with what we have left.

That is a lesson that my father mastered. In his life and in the manner of his death, he taught me and others how to live — how to make music with what we have left.

He indeed had a wonderful life. Thank you. 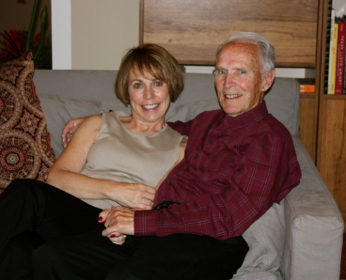 The Morning after Death

The Sweeping up the Heart

And putting Love away

We shall not want to use again

The Morning after Death

The Sweeping up the Heart

And putting Love away

We shall not want to use again