Your Second Thought and Your First Word 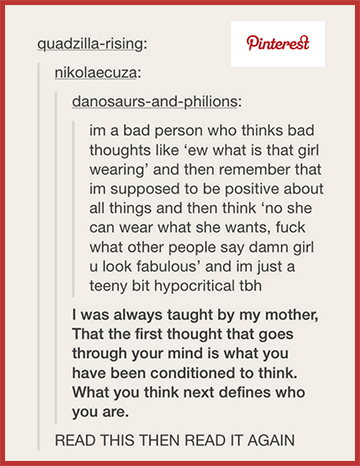 My daughter recently sent me the above pin she found on Pinterest as it reminded her of something I used to tell her. When she was in middle school, she was afraid she was a horrible person because she had mean thoughts about others. I would tell her you can’t always help the first thought that comes to your mind “but you are responsible for your second thought and your first word.” I think I like the above explanation better that our first thought is what we’ve been conditioned to think and what we think next defines us.

And girls especially have been conditioned to think it’s normal to think mean thoughts about other girls. Those who watch reality TV shows that show women being horrible to each other are even more likely to view mean girl behavior as inevitable. The Girl Scouts Institute did a survey of 1,000 girls between the ages of 11-17. Here is a summary of the results:

Regular reality TV viewers accept and expect a higher level of drama, aggression, and bullying in their own lives than non-viewers

Wouldn’t it be nice if we were conditioned to think the best of others and not the worst. A mentor of mine once advised “Assume best intentions” when wondering about the behavior of another. It’s amazing how that little thought shift can alter your perception of others.